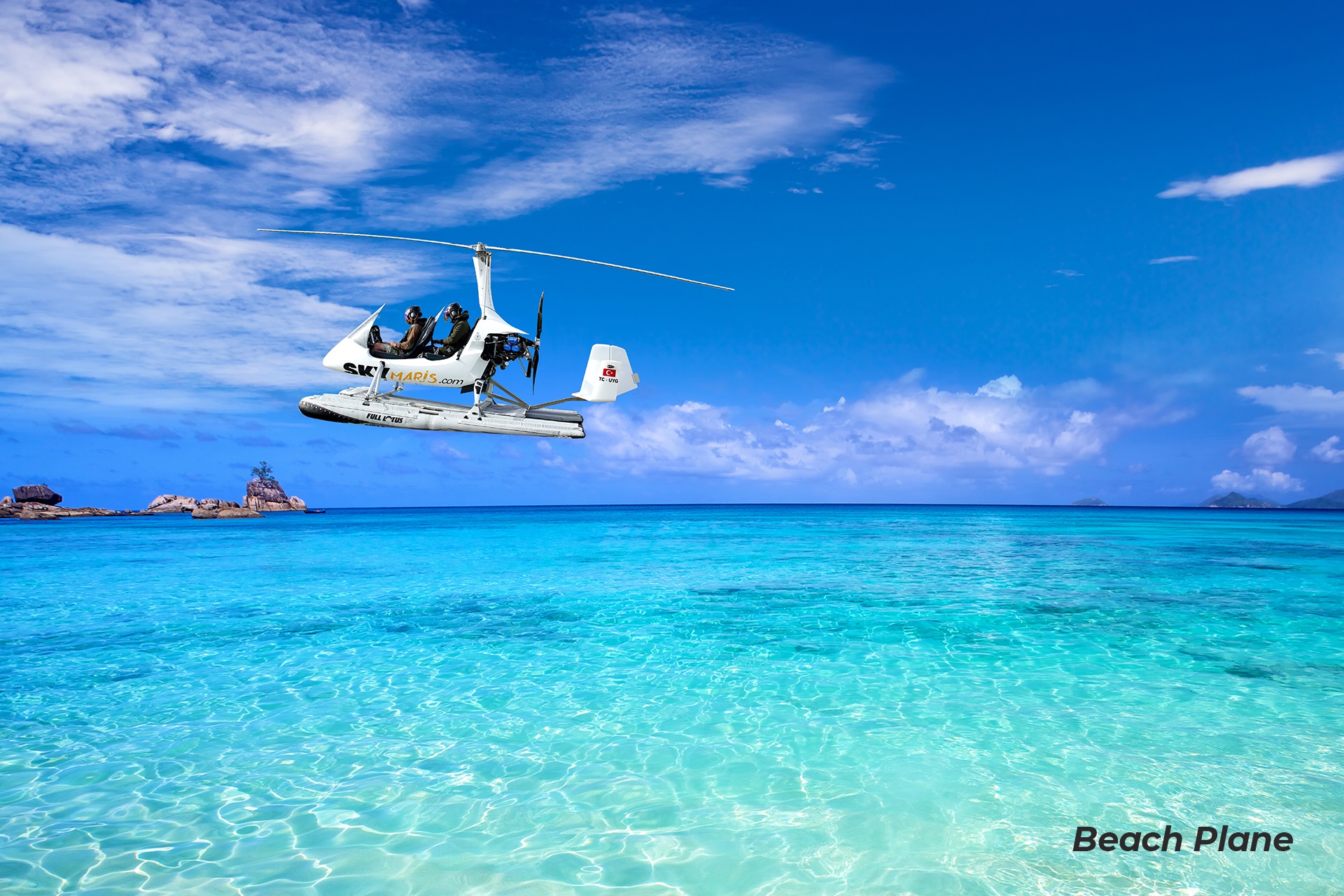 12 Top-Rated Things to Do in Marmaris

Marmaris is mostly known for its all-inclusive resort holidays, which fully focus on sun and sand. Beyond the beach, though, there are plenty of other things to do around this bustling vacation town.

Stunning Marmaris Bay sits just where the Aegean and Mediterranean Seas meet and is speckled with islands and rimmed by dramatically rugged peninsulas. This makes Marmaris a popular base for yachting trips along the coast.

Back on land, the classical-era ruins of Kaunos and Knidos, the Greek island of Rhodes, and many smaller historic sites, are all within easy day tripping distance from town. This makes it easy for summer sun-seekers to mix some sightseeing into their beach vacations.

Check out where to go with our list of the top things to do in Marmaris.

Note: Some businesses may be temporarily closed due to recent global health and safety issues.

1. Sail along the Coast in a Yacht 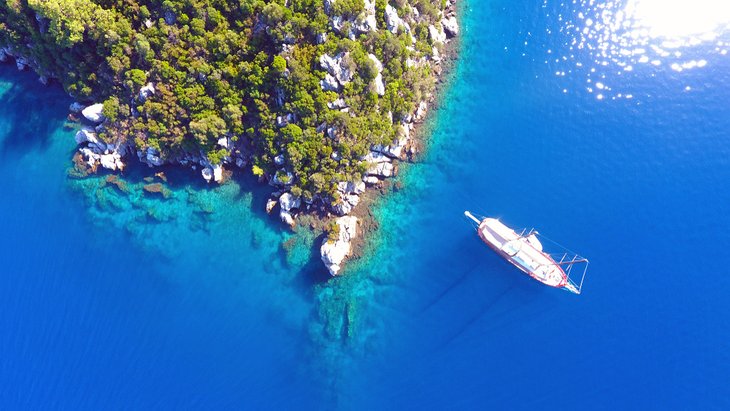 Marmaris made its tourism name due to its prime coastal position, fronting a beautiful harbor. Unsurprisingly then, the most popular way to experience the lush coastline scenery of Marmaris Bay is to take to the water.

There are plentiful boat tours to choose. With only a short time in town, one-day group tours aboard large boats cruise around the islands of Marmaris Bay, anchoring along the coast for swimming stops.

For many vacationers, though, Marmaris is purely a jumping-off point for a multi-day sailing trip on a gület (Turkish wooden yacht). Throughout summer, sailing trips cast off from Marmaris harbor, heading east along the densely forested coast to Fethiye or Göcek or alternatively to sail around Greece's Dodecanese islands.

While experienced sailors can hire yachts for these trips, the more typical option is to book and then hop aboard a fully-crewed vessel where your only responsibility is soaking up the sun and sea. This means Marmaris' yachting trips are suitable for completely unexperienced seafarers. 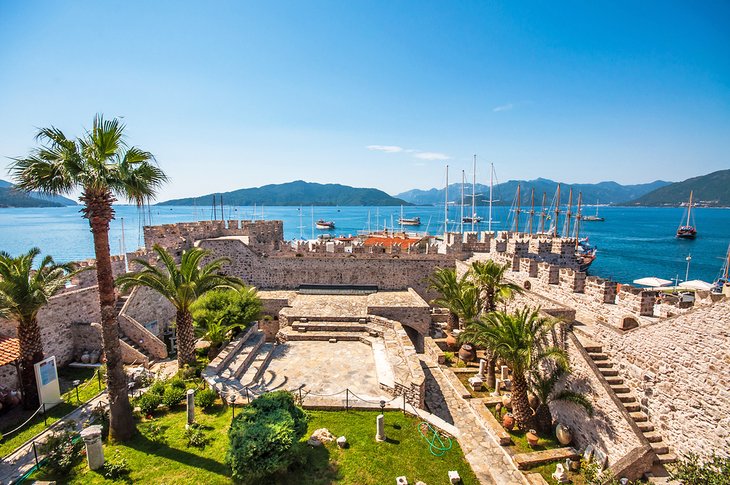 Marmaris may be a fully fledged resort town but it also has history to explore.

Even if you've dedicated your vacation to lying on the beach, or you're only in town for one night before setting sail, make sure to visit Marmaris' bijou old town area.

Lording it up over the harbor, Marmaris Castle and the surrounding cobblestone lanes of the old town are the town's major historic tourist attractions. The castle was used as the staging ground for Sultan Suleyman the Magnificent's Ottoman troops, when they recaptured the island of Rhodes.

Today, some of the halls are used to display artifacts unearthed in the local region, while the ramparts offer sweeping vistas across the bay.

The route up to the castle is through the old town's narrow cobblestone lanes, rimmed by whitewashed cottages with bougainvillea spilling over the walls. This tiny area is a tranquil respite from the bustle of the harbor, just steps away. 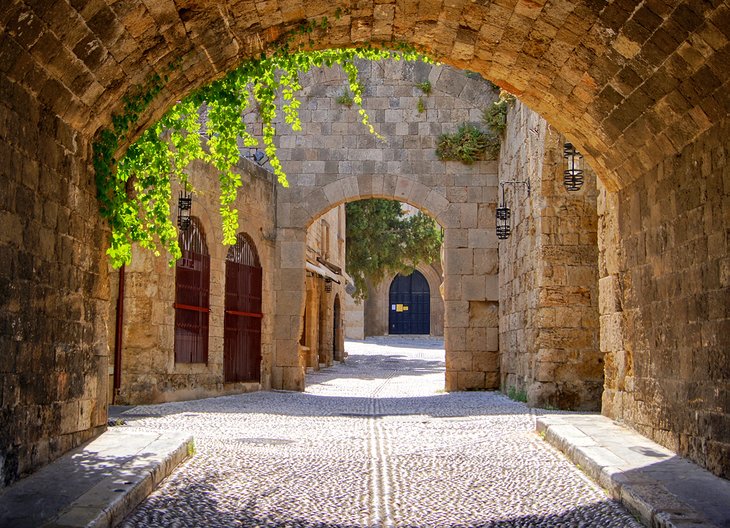 The Greek island of Rhodes, the largest of the Dodecanese Islands, is only a one hour journey away on the daily (April to October) catamaran ferry service.

Being so close, one-day return transport tickets make this Greek island one of the most popular places to visit while staying in Marmaris.

With just one day, concentrate your sightseeing in Rhodes Town, where all the main tourist attractions are concentrated within easy walking distance of the port where you disembark.

The UNESCO World Heritage listed walled old town is the main focus, with its cobblestone alleys and its golden-toned stone ramparts leading to the dramatic Palace of the Grand Masters.

4. Hit the Beach along Marmaris Bay 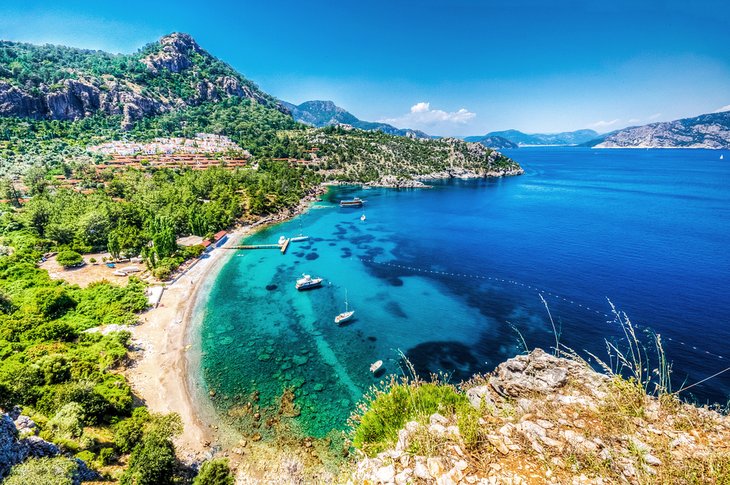 The best beaches in the Marmaris area are all out of town, speckled along the hilly, pine-forest-clad coastline.

The beach areas offer full facilities for easygoing days of sun and sand. There are plenty of sun lounges with shades for rent, and restaurants and cafés line the shore.

Be aware, though, that both these beaches are extremely popular during the prime summer months of July and August. Beach space can be a bit of a squeeze.

The quickest way to access both beaches from Marmaris town is by water-taxis, which shuttle between Marmaris harbor and the beaches regularly throughout the day during the summer months. Otherwise, there are regular minibuses that putter between the beaches and the city. 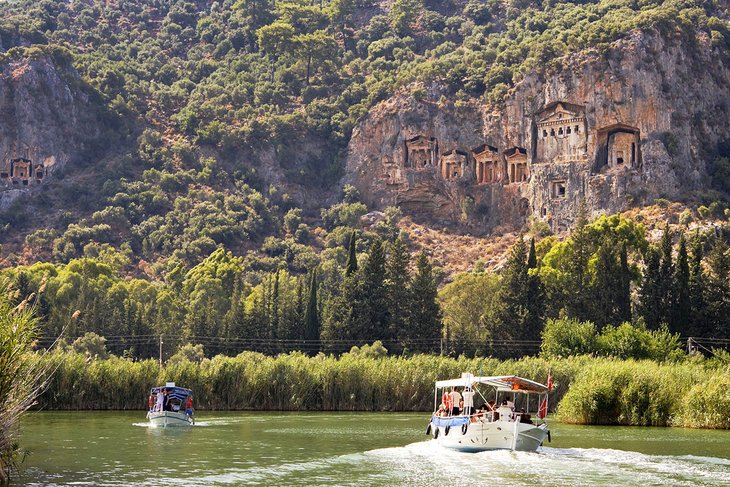 The small town of Dalyan is 90 kilometers east by road from Marmaris. Riverboat cruises, along the winding Dalyan River, which rims the town, are the top activity while here.

The scenery along the river is dramatic, with the high cliff banks bearing ornate tomb facades cut into the rock. The tombs date from between the 4th and 2nd centuries BC.

Boats either head downriver to Iztuzu Beach and out along the coastline or, for a longer tour, putter upriver to Köyceğiz Lake. The lake tours include a stop at the Sultaniye hot springs, where you can slather yourself with mineral-rich hot mud.

Plenty of tour operators in Marmaris offer Dalyan day trips (usually booked through your hotel), which include return transport to Dalyan, lunch, and the river cruise as the main activity of the tour.

6. Drive along the Datça Peninsula 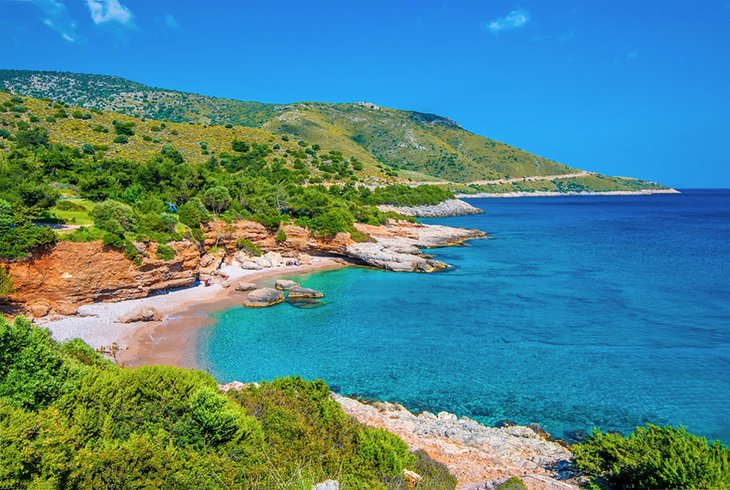 For a highly scenic road trip, hire a car for a day to drive Turkey's Datça and Bozburun Peninsulas. Marmaris sits just east from these two peninsulas and is the perfect springboard to discover the rugged coastline scenery they both offer.

It's a 99-kilometer drive right to the tip of the Datça Peninsula, where the ruins of Knidos sit.

Along the way, stop off to explore the little village of Eski Datça, with its traditional whitewashed fishing houses and cobblestone lanes. A swim-stop at Kumluk Beach in Datça town is also a refreshing break on a hot, summer day.

The ruins of Ancient Knidos ramble along the peninsula point, sitting between olive groves and forested hills. The main focus is the Hellenistic theater, which fronts the shore, overlooking the sea. The site's other major monument is its Hellenistic temple.

The coastal views along the twisty section of road between Datça town and Knidos is enough of a reason to visit.

7. Ramble through the Ruins of Kaunos 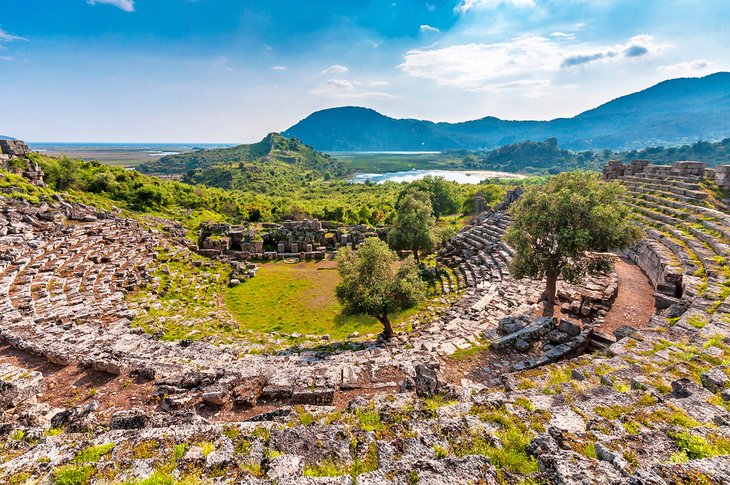 The mighty ruins of Ancient Kaunos lie on the opposite shore of the Dalyan River from Dalyan town (88 kilometers east if driving from Marmaris).

Once a major center of Carian culture, Kaunos dates back to 9th century BC, but its heyday began around 400 BC, when its position on the border area between Ancient Lycia and Ancient Caria caused it to bloom into an important seaport and trading center.

The silting up of its ports led to the city's decline in importance, though the site was not fully abandoned until the 15th century.

There are excellent views over the surrounding countryside from the hilltop site. The remnants are scattered along the hill slope and include a large Roman baths area, a theater, a port agora, and the ruins of an acropolis.

Most Dalyan tours from Marmaris focus more on the river pursuits rather than the ruins of Kaunos, so if you want time to explore the ruins, this is best done by hiring a car and heading there independently.

If you arrive early in the morning, you can often get the entire site to yourself.

8. Soak Up the Sun on Iztuzu Beach 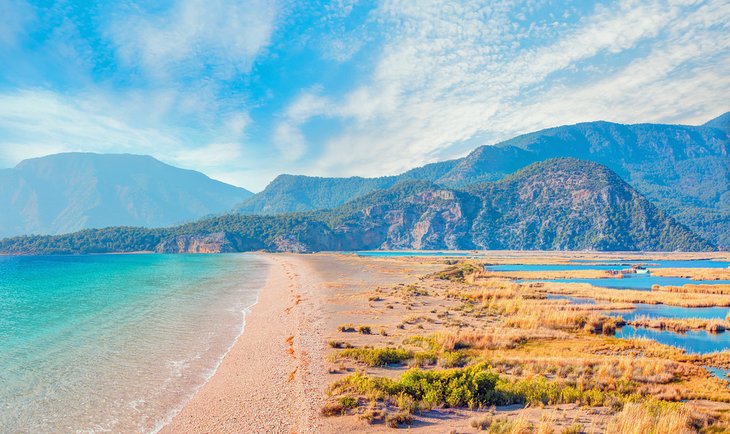 Protected as part of a nature park, Iztuzu Beach (95 kilometers southeast if driving from Marmaris) is one of Turkey's most famous strips of shore, with its white sand stretching for just under five kilometers.

Unlike many of the beaches in the Marmaris area, the nature park status means there's no major development here, which gives the shore a tranquil, natural feel.

As well as being a beautiful spot for a lazy day of simply swimming and sunbathing, the beach's fame comes from its protected status as a major nesting site for loggerhead turtles. Sections of the beach are out of bounds to sunbathers to help protect the turtle nests.

From Marmaris, plenty of tours head here for a day trip focused purely on beach time. Other trips offer a short stay on the beach before heading up the Dalyan River on a river cruise boat.

On the beach itself, one café offers refreshments and dining, and sun lounges and shades are available to rent. 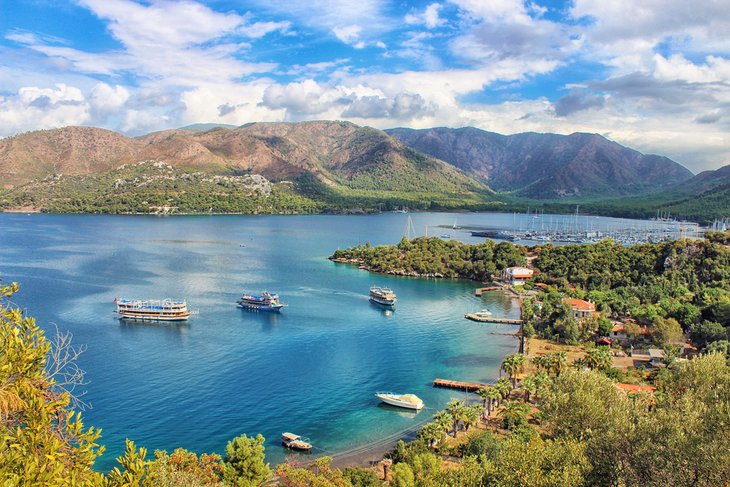 Marmaris National Park covers most of the rocky, forested coastline that rims the blue waters of Marmaris Bay, stretching eastwards from the bustle of Marmaris town.

Many travelers opt to see this stretch of coast from aboard a yacht on a tour, but you can discover more of this area by heading into the park itself, inland. Jeep tours, ATV tours, and horse riding can all be arranged.

The forest here is mostly red pine, oak, and plane trees. A variety of wildlife live within the park, though the mammal you're most likely to see are wild goats. Bird-watchers should keep their eyes peeled for falcons and eagles.

The most popular destination in the park is Yildiz Adası (Yildiz Island; more often referred to as Paradise Island by tour operators). Despite the name, it's not actually not an island but rather a large peninsula that juts out prominently into Marmaris Bay.

As well as its yacht marina and some resorts in the tiny settlement of Adakoy, Yildiz Adası offers plenty of panoramic vistas. Hike uphill on the rough trail from the village for swooping views across the bay.

A little farther inland are the Nimara Caves, where archaeologists have found evidence of human habitation dating back 12,000 years. 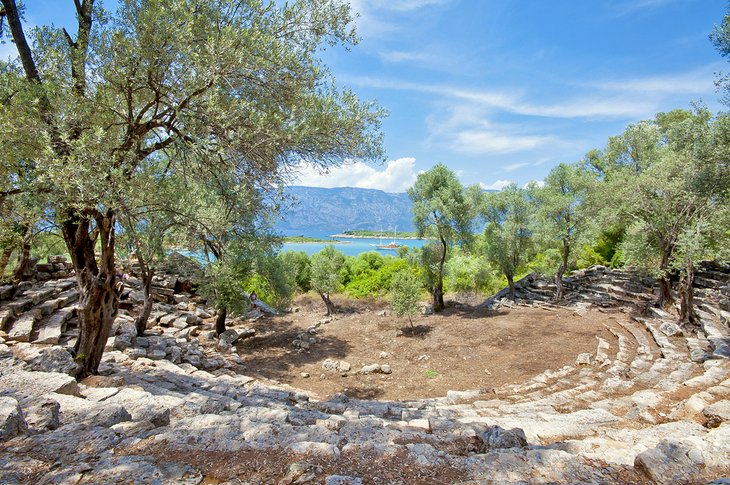 Sedir Island (sometimes referred to as Cleopatra Island) sits in Gökova Bay, just offshore from Çamlı, 23 kilometers north from Marmaris. During summer, regular ferries shuttle between Camlı on the facing shore and the island throughout the day.

Most people are here to spend time on Cleopatra Beach, where the sand laps shallow, crystal-clear turquoise water. Sedir Island, though, is also home to the ruins of the ancient site of Kedrai, a Carian city that later came under control of Rhodes as part of the Rhodian Peraia.

If you're keen on walking and history, there's plenty to explore away from the beach, including a theater with sea views, an agora, two churches from the later Byzantine era, and some remnants of city walls.

The remains of the Sanctuary of Apollo temple at the island's eastern end are the largest section of ruin, so head here first if you're short on time.

11. Dive amid Ruins in Marmaris Bay 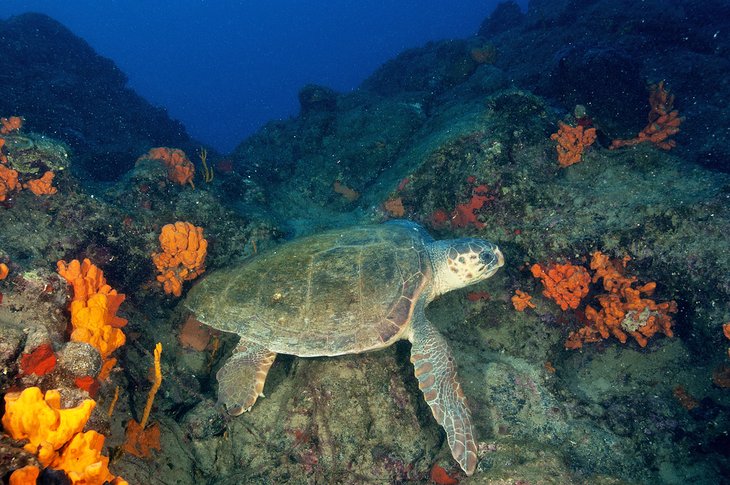 There are around 50 dive sites accessible from Marmaris though, obviously, diving here in the Aegean Sea is not going to offer colorful coral reefs and tropical fish.

The most interesting sites here instead offer an opportunity to dive amid classical-era ruins. On all dives there's a good chance of seeing the area's protected loggerhead turtles.

Galleon Cove is one of the best dive sites for underwater photography with the rocky seabed festooned with amphorae, and the ruins of a Hellenistic-age ship that sunk here. It's one of the farthest dive sites from Marmaris, so it usually has to be specially requested by divers.

Aksu Cove sits just off Yildiz Adası (sometimes called Paradise Island) in Marmaris Bay, so it is a popular dive site. There are plenty of amphorae dating from the Byzantine era in this area.

Ince Cape, also near Yildiz Adası, is often visited by divers chiefly for the underwater topography and the variety of sponges and fish in the area.

12. Get Off the Beaten Track at the Ruins of Amos 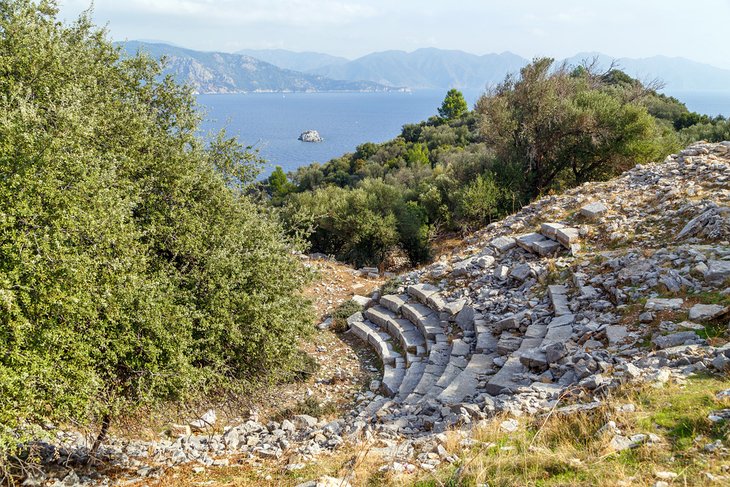 The theater is the only major monument left from the site of Ancient Amos, which was once part of the Rhodian Peraia group of settlements (under the control of Rhodes) in the classical era.

The theater originally seated 1,300 spectators. Today, a partial section of the seating, as well as most of the orchestra below, has been preserved. The ruins sit surrounded by pine trees, and the site commands excellent views across Marmaris Bay, which are worth the short hike alone.